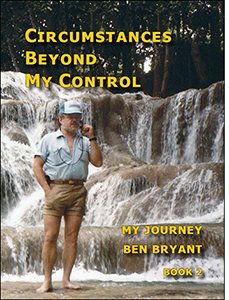 An excerpt from Circumstances Beyond My Control, the chapter called Spirit, by Ben Bryant.

Man is kind enough when he is not excited by religion.
-Mark Twain (A Horse's Tale)

I intend no disrespect for anyone's belief system. I simply want to tell you about mine.

I am not an atheist. And after many years in the wilderness, as it were, I am now a very Spiritual man. But I make a strong distinction between being Spiritual and being religious.

I was raised as a fundamentalist Southern Baptist and, even though I had doubts, I adhered to those teachings (with a few digressions) until well into my college years. From age twenty or so until I was in my late thirties I wanted nothing to do with anything even remotely smelling of religious beliefs.

The experience of Transcendental Meditation launched me on the first leg of my Spiritual journey. Additional openings to Spirit were provided by the est training, Actualizations and many other consciousness workshops and seminars between '73 and '85.

These experiential events so stimulated my mental and Spiritual appetites that I began voraciously to devour books on metaphysical and scientific topics from Fritjof Capra's The Tao of Physics to Paramahansa Yogananda's Autobiography of a Yogi. I read Gary Zukav's The Dancing Wu Li Masters, and several other books on quantum physics. I read all of Itzhak Bentov and Carlos Castenada, much of Richard Feynman and Stephen Hawking.

One of the things I learned through this exploration was the striking similarity between the theories and discoveries of advanced physics and the teachings of many Spiritual Masters. It was during this period that the distinction between spirituality and religiosity became clear to me. Robert Monroe's Journeys Out of the Body and Raymond Moody's Life After Life had profound effects on me. Then came Monroe's Far Journeys and my ideas about the nature of life, both physical and nonphysical began to coalesce. My six days at the Monroe Institute for Applied Science in '85 put the icing on my Spiritual cake.

So here's my take on the nature of life and what most folks call "God." I maintain that everything which exists, material and nonmaterial, collectively comprises "god." This is not exactly a revolutionary concept. Some (very liberal) people even interpret the various "bibles" of their particular faiths in a way not very far from that idea. Okay, fine. I'm just not a fan of orthodoxy. For me the structure of any organized religion with its rituals, rules and what I perceive as herd mentality has no appeal. For many this structure is comforting and reassuring but to me it seems more like mind (behavior) control created by a "priest" class for political purposes. There are, no doubt, exceptions to this and, anyhow, if it works for you that's great. I respect that. As the old saying goes, "whatever gets you through the night."

The structure of my concept [of physical reality] is greatly influenced by Bob Monroe and his term, Time Space Illusion (TSI). I'm just gonna state this concept in a matter-of-fact way and you can interpret it, believe it, think I'm a looney tuner or whatever you want. I have no investment in your agreement. I am not interested in convincing or converting anyone to my way of perceiving so-called reality. There is room for as many ideas about "reality" as there are minds to think it up.

We are primarily beings of Spirit and, as such, we do not die. From time to time (also an illusion) we change form and enter TSI for various reasons and durations. Our true existence is not physical  in the sense that we who currently possess bodies in TSI regard as physical.

So one of us, in the native spirit state, decides to enter TSI for whatever reason. Maybe to take a vacation, to experience something that's only available in the physical, maybe to clean up something that went wrong in another trip to TSI, maybe to learn something; whatever reason, it doesn't matter. Anyhow, to a spirit being, TSI is like the ocean floor is to a human. So the person coming to TSI needs a diving suit, aka a human body.

I believe that while we are in Spirit form we make all the decisions about our trips to TSI so that we will be in the position to experience the necessary elements in this reality to fulfill the purpose of the trip.

Except for very advanced beings, once we don the human form we forget all about where we came from. This generally happens slowly and explains why small children often see and hear things that older humans do not. As we grow physically mature most of us even forget why we came here in the first place. Some don't. Mozart obviously didn't, to cite one example.

On some deep and usually unconscious level we actually know where we came from and why we came. Many of us eventually discern our purpose on the cognitive level. But whether or not we do get our Spirit's intention consciously, our true Self at least knows when it's finished here so we discard the diving suit (human body) and return to the spirit state  home.

Here is a test to find whether your mission on earth is finished: If you're alive, it isn't.
-Richard Bach (Illusions: The Adventures of a Reluctant Messiah)

There's a bit more (not too much) about my Spiritual life in Circumstances Beyond My Control but mainly it's tales of adventures in film production. You'll find it here.