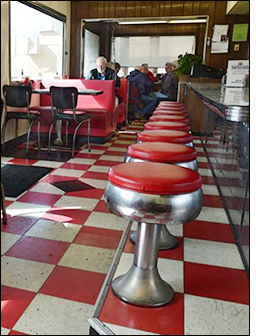 Sam's luncheonette was the holy temple of humanity located on Bedford Ave between Parkside and Clarkson in the Flatbush section of Brooklyn. It was a stone's throw away from PS 92 on Parkside Avenue. This is the early sixties, the decade of the transistor radio. Sam planted his over the shiny metal grill cover. It was an RCA locked in on '77 W.A. Bee Ceeee! Kennedy was in the White House. The radio stayed on. Always with the exception of spring until the end of September. This was the time of Ralph, Bob and Lindsay, the faces filling the screen of a small black and white occupying a space between two green malted mixers.

This was Sam's luncheonette packed with working class stiffs who didn't have time for the stuffed shirts of City Hall or Wall Street just below it. This was a place for precinct cops, sanitation workers, meter maids, mailmen, cabbies and bus drivers.

Ralph, Bob and Lindsay were the voice of the New York Mets, short for Metropolitans and they were the laughing stock of baseball. They were the team struggling through every game of a 150 plus game season and rarely coming out on top, just like the guys packing Sam's luncheonette but just like every hungry soul racing in and out of Sam's these Mets weren't quitters. When the Mets were on, the radio was off.

This was Flatbush Brooklyn a mixed neighborhood long before there was any talk of integration. Sammy and his partner Ben were a couple of Jews. They had there luncheonette and lunch time counter full of black kids, white kids, Italian and Irish kids. Chinese kids, Spanish kids. They were kids. They were hungry kids. They were living proof Brooklyn was the center of the globe, a neighborhood united in its differences, divided by its past. We had overcome and Sam's luncheonette proved it.

I remember this little black kid who came in one morning and climbed up onto the stool next to mine. He was skinny like me and must have weighed 60 pounds. His hair cut short, he wore a white polo shirt and blue slacks. I remember thesneakers. Hi top PF Flyers. His eyes bounced between my eyes and my plate. Sam approached with his black and white notebook, pencil pulled from behind his ear.

The kid pointed at my plate, his face blank.

"Can I get that?" the boy asked.
Sam nodded reciting aloud as he jotted, pencil to paper.
"2 cheeseburgers, fries and a Coke? I'm guessing you want that cooked?"
The boys blank stare is wiped clean with a nod and wide grin.

"You got money," Sammy asks and we knew better than to lie to Sammy. If we had money, great. If we didn't the book would record, "Your name. Your address. Phone number. Parents name. Grade. Teacher. "Okay. You want that."

Sometimes Sam's son would come in. "Hey Pops."
Sam looks up. "Who are you?"
"Your son. If you came home once in a while you'd know these things."
"Jerry? Oy Gevalt. Bonnie's appt."

Years later when Sam and Benny were gone and I ran into Jerry I asked about the luncheonette. I wondered how Sam made any money. He asked if I remembered the black waitress.

"She had two kids in PS 92. She would bring them in every morning for breakfast, grab an apron and work the counter and tables til 3-4 in the afternoon. We had a huge breakfast crowd. She wouldn't take a dime from my father. She wouldn't even keep the tips. She'd say, "You feed my kids. We do for each other."

He went on to explain the luncheonette was a numbers spot for the mob. There was some money to be made in that until 67 when the city muscled the mob out of the numbers racket with a pick-3 lottery game. There wasn't really any money in that unless, of course, you were the city, but we didn't have any investors. There was no board of directors looking for increased returns on their money. We had a savings account. Some months it grew and some months it shrank. We had a house to live in, food to eat and a bus pass for school. Life was good. It was a luncheonette, not a microphone. We weren't going to live like Jagger and Richards but we were living and then came the clown with his Golden Arches and the Burping King. No fresh food. No people. Only wallets scattered across endless counters all bouncing to the latest jingle. Here! Have it your way as if having it your way wasn't something you had to begin with.

Sam's son is gone now, too. I can't help but think of them as I maneuver through the Delta Summer of a pandemic in a Hospital bed in Portland, Maine. Isn't this the summer two billionaires flew two ships into space for all of about two minutes. One of em even sold a seat for $24 million dollars and the buyer ended up giving the ticket away because of a prior commitment. I wonder how many food banks you could fill for the price of a space trip and for how long? I hear next summer Virgin-Galactica will begin regular flights for the discount price of around $300,000 dollars. I'd rather have 2 cheeseburgers, fries and a Coke for a buck 25 back at Sam's luncheonette, when people seemed to still care about the country, one another and those New York Mets.

Well, I Suppose
Gimme Shelter
I Remember Your (John Lennon Poem)
Life During War Time
We Now Hold Truth to Be Self-Evident
Social Media
You Can't Always Get Want You Want
Old Friends
Dear Mr. President
Are You an American?