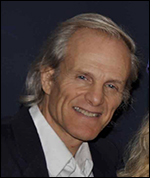 Alan Steinfeld is the host and producer of the cable television program New Realities. For the past twenty-five years he has been presenting new ways to integrate spirituality into the everyday world. His popular YouTube channel has over 18 million views Youtube.com/newrealities. But recently, he has been writing about at the creative process as a way to higher perceptions.

He is currently working on a book about the Artist's Role in creating New Realities. He is the guest editor for the upcoming issue of the arts magazine, New Observations.